Brussels gets a new house. After the Holland House, the EU capital will get a Slavonic House in 2020. The Czech-German David Chmelik (49) has found Belgian investors to buy a building in the European Quarter at Rue de la Loi in order to bring Slavonic Europe together. There shall be a shopping centre (‘the first in the European Quarter’), a restaurant and offices. ‘Non-Slavs are also welcome’.

Chmelik was an EU official of the European Commission’s Directorate-General for Budget and felt that this was too much about money and too little about culture. He is trying to unite the thirteen Slavonic countries under the name of Slavonic Europe and thus to give European integration a stronger basis. He does not want a nationalist Slavonic movement, but rather to enhance the cultural, linguistic and business ties between the Slavs. ‘We understand each other, are accustomed to diversity and are the largest ethnic group with three hundred million people’.

Slavonic Europe shall also champion more public support for European integration. ‘Europe is now working in such a way that if Germany and France agree, the rest must follow. That is one of the problems of the European Union. It lacks cohesion. The Union cannot be united top-down by nation-states.’ European governance must have the support of citizens, says Chmelik. How? ‘By bringing the Slavs together as the largest cultural entity in Europe. Europe lacks emotion, we Slavs can bring it in’.

At a first glance it is a bit of a complicated road, but this doesn’t discourage him. When asked whether Slavonic Europe is Europe, he said:’ Slavs reach out to both Europe and Asia. They often do not feel being taken seriously. That is another reason why we should join forces in a positive way.’

For the original article in Elsevier Weekblad in Dutch language, please 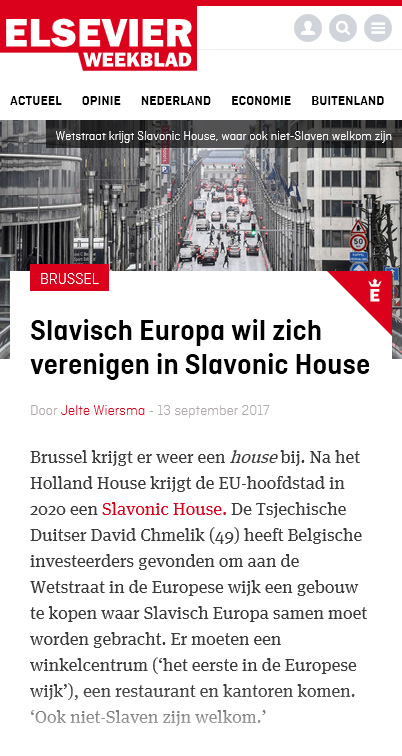